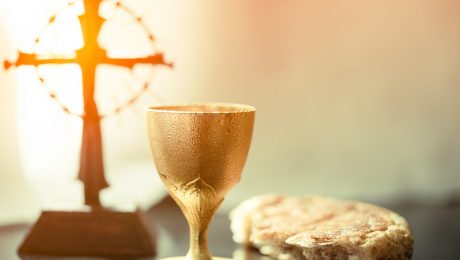 In the bible, numbers very often have a symbolic or mystical meaning. John’s Book of Revelation, for example, makes extensive use of numerology. His numbers are not to be taken literally; they have a deeper meaning. Today, let’s reflect on Luke’s use of numbers in his account of the feeding of the 5,000.

The event takes place after a long day of healing and teaching about the kingdom of God. Evening is coming, and the 12 suggest that the crowd be dismissed so that everyone can go to the towns around this “deserted place” to buy food for themselves. This “deserted place” is reminiscent of the desert of Tsin where God rained down manna upon the people of Israel during their exodus journey. That was the old order, the old time. Jesus challenges them to stay put and to give the people something to eat themselves. The 12 answer that they only have 5 loaves and 2 fish. They are about to experience the new order, the new time, the kingdom of God.

This gathering is marked by the number 12, the symbol of entirety and cosmic order. In the old order people, a group of tribes, were struggling in a “deserted place” and needed God to care for them. The people of the kingdom, however, are a community and have all they need. They have 5 loaves and 2 fish.

5 is symbolic of transformation and illumination. 2 symbolizes harmony. In this meal the people will be fed with an intimate knowledge of God which brings the harmony that only divine healing can bestow. This illumination and harmony spreads to groups of 50 and then to the entire group of 5,000.

On this day, the feast of the Body and Blood of Christ, we hear the words of invitation, powerful and clear that invite everyone to this meal in the kingdom of God, “Take and eat. This is my body. This is my blood. Do this in memory of me”

Lord Jesus, we worship you living among us in the sacrament of your body and blood. May we offer to the Father in heaven a solemn pledge of undivided love. May we offer to our brothers and sisters a life poured out in loving service of that kingdom where you live with the Father and the Holy Spirit, one God for ever and ever. Amen. 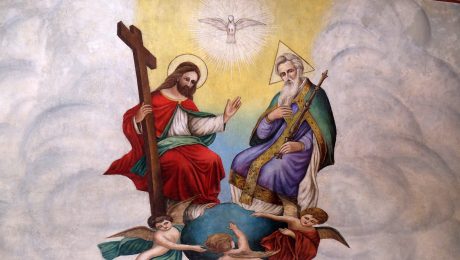 Following the Feast of Pentecost, the Church officially moves into Ordinary Time. The liturgical calendar is divided into “seasons:” Advent-Christmas-Epiphany, LentEaster, Pentecost and the Sundays following, Ordinary Time.

During the thirty weeks of Ordinary Time, the Church focuses our attention on the teachings of Jesus. We listen to many parables. We witness many miracles and healings that Jesus performed. We contemplate their meaning and try to adapt something we’ve gleaned from them to our everyday lives.

To start off this portion of the liturgical year, the Church accents three important elements of our faith by naming the Sundays: Trinity Sunday, the Feast of the Body and Blood of Christ and the Feast of the Sacred Heart of Jesus.

With the coming of the Holy Spirit at Pentecost our “understanding” of God is complete. The Father sent the Son to redeem us. The Son, in turn, sent the Holy Spirit to teach us, guide us and enlighten us. We contemplate God as Creator, Redeemer and Sanctifier One God, three Persons: The Holy Trinity.

In the Feast of the Body of Blood of Christ, we celebrate Jesus’ abiding presence among us in the Eucharist that we so often celebrate.

Then we celebrate the tremendous love of the Heart of Christ revealed to us though his life, his sacrificial death, and his resurrection. This is commemorated in the Feast of the Sacred Heart of Jesus.

But today, we focus on the Feast of the Holy Trinity. In the second reading, from Saint Paul’s letter to the Romans, we’re given an important teaching: “The love of God has been poured into our hearts through the Holy Spirit that has been given to us.” Paul is telling us that we have been drawn into the life of the Trinity because the Holy Spirit has poured God’s love into us. And so, we dare to call God, “our Father.”

This first reflection in Ordinary Time is profound but so basic to who we are as Christians. We believe that we’re children of God because we share God’s very life by sharing in God’s love. We deepen and perfect that love when we love as Jesus loved – when we love as totally as we can, when we lay down our lives for one another every day, when we live, not for ourselves, but for others.

Let’s conclude our reflection by recalling the teaching of John, the Evangelist. “God is love, and those who abide in love abide in God, and God in them.” (1 John 4:16b) 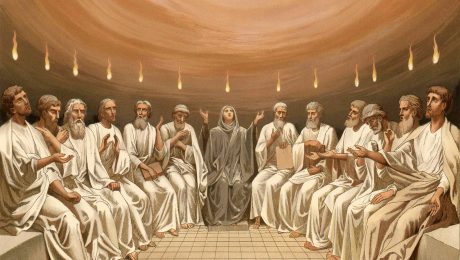 We have two accounts of the Pentecost event to enrich our reflection today. Let’s look at the gospel account first.

John’s account is subtle; it’s contained within his resurrection account. The passage begins on the day of the resurrection. Shortly before sunrise Mary of Magdala discovered that Jesus’ body was no longer in the garden tomb. She went back to tell the disciples. Peter and John ran back to the tomb with her to find it just as she had reported. After inspecting the tomb they returned to the group leaving Mary at the tomb.

Weeping, she looked, once again, into the tomb. There were two angels dressed in white sitting on the slab where Jesus’ body had been laid. “Why are you weeping?” they asked. Numb with grief, their appearance made little impression on her. Her answer was simple and direct. “They’ve taken my Lord away and I don’t know where they have put him.” She didn’t even wait for a response. She stood up only to find a man standing near her. He asked the same question as the angels. “Woman, why are you weeping? Who are you looking for?” Presuming that he was the gardener she pleaded with him, “If you have taken him away, tell me where you have put him, and I will go and remove him.” Then, in the matter of a second, the darkness surrounding her gave way to the light of the sun. The man spoke her name, “Mary.” Jesus was alive!

Meanwhile Peter and John had returned to the other disciples who were in hiding behind locked doors. The fact that Jesus’ body had been taken away only increased their fear of imminent arrest. Their muffled conversation was suddenly replaced by gasps. People moved to the periphery of the room. Jesus was standing in the middle of the room. His rich, full voice extended the Sabbath greeting to them, “Shalom aleichem.” He showed them the wounds in his hands and his feet. It was Jesus. Truly. It was Jesus. He was alive! Some cried. Some laughed. Some put their hands over their mouths in amazement. He greeted them a second time. “Shalom aleichem.” Then, he commissioned them. “As the Father sent me, so I am sending you.”

It’s at this moment, the very evening of the resurrection, that John inserted the Pentecost event. It was a simple action. “He breathed on them and said: ‘Receive the Holy Spirit.’” This was the moment of a second creation. Everyone in the room recalled the words of their ancient scripture. “God shaped man from the soil of the ground and breathed the breath of life into his nostrils, and man became a living being.” Jesus went from one to another breathing

Luke’s account was much more dramatic, and much more public. It took place fifty days after the resurrection – after the Passover of the Lord. It was on the day of the Jewish feast of Shavuot, commemorating the day God gave Moses the law – the day the twelve tribes became a nation with law and statutes.

The disciples were in hiding when they heard the deafening noise of a driving wind. It was so loud that it was heard in the street below them. Then a fire bolt exploded in the middle of the room sending tongues of fire to rest on the head of each man and woman. The flame purified them of their fear and hesitation. The people outside not only heard them proclaiming “the mighty acts of God,” but heard the proclamation in their own language, and the proclamation pierced their hearts. Three thousand people came to believe in Jesus that day!

On the day of Pentecost God breathed new life into the frightened disciples of Jesus. That day, the fire Jesus promised to cast over the earth entered the hearts of the disciples only to pour out of them in words of proclamation.