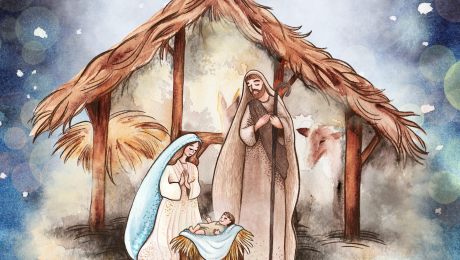 There were shepherds in that region living in the fields and keeping night watch over their flock. An angel of the Lord appeared to them and the glory of the lord shown around them, and they were struck with great fear. The angel said to them, “Do not be afraid; for behold, I proclaim to you good news of great joy that will be for all the people. For today, in the city of David a savior has been born for you who is Messiah and Lord. And this will be a sign for you: you will find an infant wrapped in swaddling clothes and lying in a manger…”

When the angels went away from them to heaven the shepherds said to one another, “Let us go then to Bethlehem to see this thing that has taken place, which the Lord has made known to us.” So, they went in haste and found Mary and Joseph, and the infant lying in a manger. When they saw this, they made known the message that had been told them about this child. All who heard it were amazed by what had been told them by the shepherds. And Mary kept all these things in her heart. (Luke 2:8-12, 15-19)

In this portion of the account of the birth of Jesus, Luke doesn’t relate this story as one would relate the stories on the 6 o’clock news. He’s creating a sacred narrative meant to teach the generations after him the essence of the good news of Jesus Christ.

In the narrative, the blinding light of God’s glory appears in the dead of night to simple shepherds. From within the light angels proclaim the good news of the birth of a Messiah who is Lord. They speak to them of a sign, an image, that will teach them all they need to know about this child. “You will find an infant wrapped in swaddling clothes and lying in a manger.” Luke mentions this twice in this short account. The angels tell the shepherds of the sign. Then Luke tells us that the shepherds went to Bethlehem to see the sign for themselves. Let’s look into the meaning of this sign.

The two images, the swaddling clothes and the manger, speak volumes about this child. The

clothes used to wrap the baby are long strips of cloth. They’re wrapped around an infant to keep it secure and warm. But these long strips are reminiscent of another long strip of cloth that would wrap this child at the end of his adult life. The swaddling clothes are an image of Jesus’ shroud. His destiny was marked from the first moment of his life. Luke is telling us that Jesus’ death is an essential part of the good news.

The second image is of the child lying in a manger. By placing the child in a manger, a feeding trough, Luke is telling us that the good news is that this child will be, in some mysterious way, food for all people. John the evangelist makes the same point in a title he gives to Jesus, the Bread of Life. The image of the manger evokes the eucharistic meal where Jesus breaks the bread, where Jesus says, “This is my body which will be given for you.” Where Jesus says, “Do this in memory of me.”

These two images stir up rich theological reflection. Throughout his gospel Luke will expand the image of the manger through his depiction of many meals Jesus ate with his disciples. Each meal presents an aspect of the eucharist. The meaning of the manger and the swaddling clothes become clear when they again come together at the Passover meal Jesus eats with his disciples, his last supper with them before sacrificing himself on the cross. 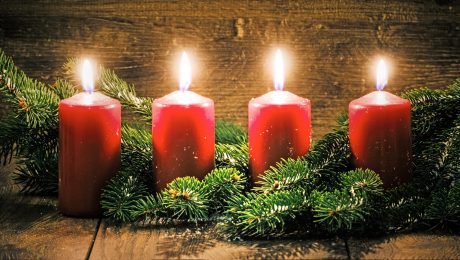 Our Christmas reflection begins a few days early as we ponder the scripture readings for the last Sunday of Advent. We begin by listening to the most famous prophecy in the Old Testament.

At a time of grave national crisis, as kings were uniting to wage war against Judah’s king Ahaz, Isaiah delivered these words of hope to him. “The Lord himself will give you this sign: the virgin shall conceive, and bear a son, and shall name him Emmanuel.”

Isaiah was speaking to the dire situation Ahaz was facing, but at the same time, his prophecy was peering into the future. In today’s gospel, Matthew incorporates this prophecy into his infancy narrative that begins, like the story of King Ahaz, with a crisis.

Joseph had discovered that his betrothed was pregnant. He had decided to quietly dissolve the engagement until he had a dream. In the dream an angel explained to him that he and Mary were part of a divine intervention that was beginning to unfold through the working of the Holy Spirit.

Mary would give birth to a son who was to be named Jesus, Joshua in Hebrew, a name that focused his destiny. Joshua means: to deliver – to rescue – to save. He would be the long-awaited savior, a military leader.

Matthew then quoted Isaiah’s prophecy but implied a radically new interpretation. The child would be named Emmanuel, “which means ‘God is with us.’” For King Ahaz the child that was to be born would be supported by God’s power to rescue Judah from invading armies. Matthew declared that, at the very moment Joseph heard the angel’s message, Isaiah’s prophecy had come to fulfillment. This child named Jesus is literally “God with us!”

Lord Jesus, with you at our side we can take up the work

of establishing your kingdom here, on earth.

Give us courage and perseverance

we will need to let your light shine and your love reign. 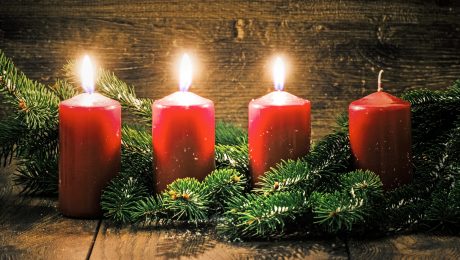 When we think of the messiah and the new world to come, we’re filled with hope, which is the core of our Advent commemoration. But these words of hope can, and often do, backfire on us. We listen to these wonderful prophecies, and then look at the world we live in. We see the war in Ukraine, the heartbreaking starvation in parts of the world, the results of global warming, political corruption, a global refugee crisis – and on and on. It’s no wonder that there’s so much depression during the holidays. We’re torn between hope and despair.

James, in the portion of his letter that we read today, gives us some good spiritual advice. “Be patient brothers and sisters, until the coming of the Lord. See how the farmer waits for the precious fruit of the earth, being patient with it until it receives the early and late rains. You too must be patient.”

Yes, we must be patient but also deeply dedicated to the work of the promised kingdom. The messianic time will come through people like me and you who relentlessly work for justice, harmony, forgiveness and healing. In today’s first reading, Isaiah warns us that this work will be challenging, so he lifts up a prayer for us. “Strengthen the hands that are feeble, make firm the knees that are weak, say to those whose hearts are frightened: ‘Be strong, fear not! Here is your God.’” 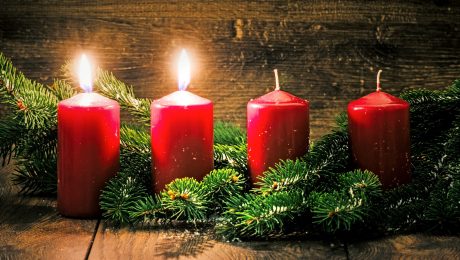 We’re beginning our reflection this week with more of Isaiah’s prophecy of the Messianic time. He reassures us that, no matter how devastated our world may seem to be, a “shoot shall sprout…a bud shall blossom.”

This sprout, this shoot, is the Messiah whose attributes Isaiah describes in detail. “The spirit of the Lord shall rest upon him, a spirit of wisdom and understanding, a spirit of counsel and of strength, a spirit of knowledge and fear of the Lord…He will judge the poor with justice and decide aright for the land’s afflicted…He will strike the ruthless with the rod of his mouth.”

Isaiah moves on to paint a poetic picture of the new world, the world of the Messianic time.“Then the wolf shall be the guest of the lamb, and the leopard shall lie down with the kid; the calf and the young lion shall browse together with a little child to guide them.” Isaiah sees a world rejoicing in peace and harmony. “There shall be no more ruin on my holy mountain; for the earth shall be filled with the knowledge of the Lord, as water covers the sea.”

It may be difficult to take this prophecy seriously, today. Our world, and our country, are in turmoil with civic unrest, racial tensions, violence, corruption among the highest government officials,

religious leaders and even parents bribing to get their children into good schools. Even though we believe that Jesus is the long-awaited Messiah, realistically, the world he came to save is still a mess of violence and corruption. Let’s move on to the gospel to add Matthew’s insight into our reflection regarding the Messianic time.

He begins by quoting Isaiah 40:3. “A voice crying out in the desert, ‘Prepare the way of the Lord, make straight his paths.” Matthew presents John the Baptist as “the voice” declaring the advent of the new time. Interestingly, John doesn’t use the beautiful poetic images of Isaiah when he speaks about it. Instead, his voice publically condemns the religious leaders who are coming to him to be baptized as a preparation for the Messiah’s coming. He knew that they weren’t coming to him with repentant hearts.

“You brood of vipers!” He spits at them. “Who warned you to flee from the coming wrath? Produce good fruits as evidence of your repentance.” There was nothing subtle about John’s condemnation. He understood that the world could never be changed by a powerful political leader even though he might conquer the whole world. His message proclaimed that the world would be transformed from the inside out!

He understood that laws wouldn’t change the world because they’re fragile band-aids to immediate problems, and that clever lawyers and politicians would inevitably squirm around them. Historically, political messiahs ended up thrusting the world into war and turmoil. No, these “messiahs” could never usher in the Messianic time.

The new world, the Messianic time, will appear and shed its light, through the human heart – a heart cleansed of ego – a heart filled with love. Saint Paul understood this when he wrote to the Romans, “Clothe yourselves with the Lord, Jesus Christ.” (Romans 13:14)

The message for this Second Sunday of Advent may sound simple, but it’s a profound challenge for every Christian. The new world will come when each of us empties ourselves and become Christ.