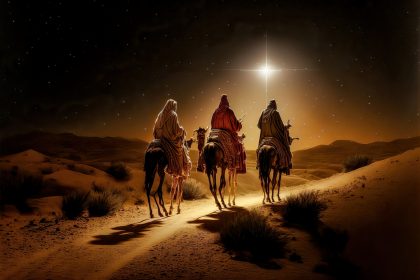 Balaam gave voice to this oracle:

ith this famous oracle from the Book of Numbers in his mind’s eye, Matthew began writing his narrative of the birth of Jesus. The prophecy was delivered by Balaam, a Moabite prophet. The Israelites, having fled from their slavery in Egypt, were en route to Canaan, the “Promised Land.” Their migration led them to the plain of Moab, northeast of the Dead Sea. There, they requested permission from Sihon, the king of the Amorites, to allow them passage through his land, but he would not permit them. Israel then battled against him, and conquered his army. Shortly after, Israel fought against Og, the king of Bashan, and conquered him.

Learning of the defeat of Sihon and Og, Balak, the king of Moab, summoned his court prophet, Balaam. He commanded him to curse the armies of Israel. But every time Balaam tried to utter a curse against Israel, a blessing came out instead. The fourth, and last, “curse” became the prophecy that Matthew used as the inspiration for his infancy narrative. “I see him, though not now; I behold him though not near: a star shall advance from Jacob, and a staff shall rise from Israel.” Balaam had looked into the dark cloud of the future, and saw a light, a great ruler who would emerge from the Jewish people. When Balaam could not curse the Israelites, Balak became frightened and withdrew his forces, leaving them in peace. During the Israelites sojourn in Moab, Moses died, and was succeeded by Joshua. He eventually led the people into Canaan, the “Promised Land.”

Matthew’s infancy narrative is a short, sacred drama bound together by a series of divine revelations that manifest themselves in dreams. Joseph had three dreams, and the magi another. This was much the same way that Luke’s narrative will use three angelic visitations, one to Zachariah, another to Mary and the third to the shepherds, to develop his story of the birth of Jesus.

Joseph had discovered that Mary, his betrothed, was pregnant. He had decided to divorce her quietly, but he had a dream. An angel told him not to be afraid to take Mary as his wife because she was pregnant through the power of the Holy Spirit. He was told to name her child Jesus, Joshua in Hebrew. Matthew stressed that “All this took place to fulfill what the Lord had said through the prophet: ‘Behold, the virgin shall be with child and bear a son, and they shall name him Emmanuel, which means ‘God is with us.’”

Matthew then gracefully introduced a number of themes. “When Jesus was born in Bethlehem of Judea, in the days of king Herod, behold, magi from the east arrived in Jerusalem, saying, ‘Where is the newborn king of the Jews? We saw his star at its rising and have come to do him homage.’” He tells us where Jesus was born in Bethlehem in Judea. Notice that there was no census, as in Luke’s Gospel, compelling the family to travel there. He didn’t name the Roman emperor, Caesar Augustus. Instead, he mentioned Herod who was the king of Judea at the time. He will become a central figure in Matthew’s narrative.

Perhaps as long as two years after the birth of Jesus, a group of magi, astrologers from the east, arrived in Jerusalem in search of a newborn king of the Jews. These men weren’t Jews. Matthew may have been referencing Persian, Zoroastrian mystics. They were stargazers. The star the magi were following was a cosmic phenomenon, but they had connected its appearance to the birth of a great king. This prophetic star led them to Judea, the land of the Jews. They thought they would find the newborn king in the capital city, but they walked into the lair of an evil king who wanted only the destruction of this would-be “King of the Jews.”

Throughout his Gospel Matthew consistently presented Jesus as the new Moses. In light of this, King Herod immediately takes on the image of the heartless Pharaoh in the Exodus story who tried to eliminate the Jewish people by killing their newly-born male children. Jesus would become a great liberator, even greater than Moses. He would lead a New Israel to a promised land that had no national borders. Jesus referred to it as the Kingdom of God.

Herod immediately called the religious leaders together to ascertain from them where the Messiah would be born.

They quoted a yet another prophecy. Bethlehem, the birthplace of King David, was the place. Asking the magi to return to him so that he could “go and do him homage,” Herod sent them off to find the child for him. After their audience, the magi again followed the star. “They were overjoyed at seeing the star and on entering the house saw the child with Mary his mother.” They prostrated themselves before him as one would before a great potentate. They offered three prophetic gifts: myrrh, frankincense and gold.

This child’s death would be central to his life and mission, so they presented him with myrrh, the ointment used for healing and embalming. This child was no ordinary child, he was divine. So, they offered him incense. This child was a king. They gave him the royal gift of gold.

These visitors from the east were not Jews. Yet they, unlike the people of Jerusalem, weren’t “troubled” over his birth. They recognized this divine king, and paid homage to him.

Looking ahead to the end of his Gospel, we note that Matthew concluded his drama of redemption with a pagan centurion’s profession of faith. When he witnessed Jesus’ death on the cross the centurion proclaimed: “Truly, this was the Son of God.” Jesus was not only “The king of the Jews” as the plaque on his cross asserted. He was truly “the Son of God.”

A dream warned the magi not to return to Herod, but to go home by an alternate route. They had witnessed the cosmic event, the birth of the new star. They saw the newborn King of the Jews. They had peered into his future. They had intimated his redemptive death. They returned to a world that had never heard about a Savior, but they brought with them the Good News of his birth.

Matthew ended his infancy narrative with several allusions to the Exodus event. An angelic messenger returned to Joseph in a dream telling him to flee to Egypt. The young family fled, under the cover of night, to the land from which their ancestors had fled on the night of the Exodus centuries before. Meanwhile, Herod, infuriated by the deception of the magi, ordered “the massacre of all the boys two years old and under in Bethlehem and its vicinity.”

The family stayed in Egypt until an angel again came to Joseph in a dream reporting that Herod had died; it was time to leave. Returning to Judah, they discovered that Herod’s son, Archelaus, had replaced him. Joseph feared him, and hesitated to return. In yet another dream, an angelic messenger directed him to settle in Galilee.

Matthew concluded his narrative in the same way he began it, with a reference to a prophecy. “He went and dwelt in a town called Nazareth, so that what had been spoken through the prophet might be fulfilled, ‘He shall be called a Nazorean.’”

For Matthew, Jesus was the fulfillment of Israel’s yearning for liberation and redemption. All the past prophecies came to fruition in him. But his coming was tinged with sadness. The people of the covenant would ultimately not receive him.

However, there was reason to rejoice. The Messiah would not only offer freedom and redemption to the Jewish people, he would offer salvation to all people. On the cross, the Divine Messiah would stretch out his arms to everyone. This was the greatest moment in history. Even the stars celebrated. 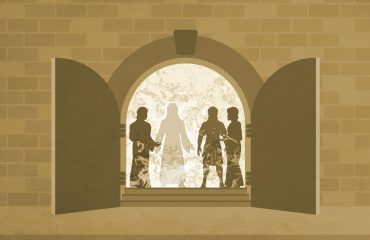 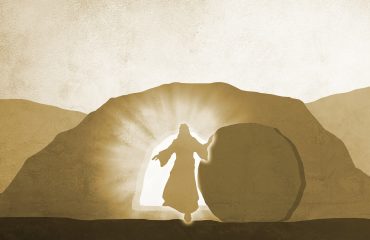 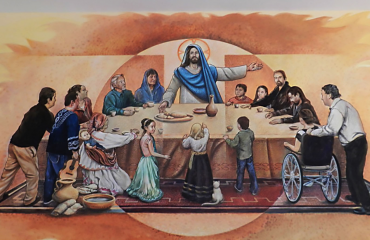