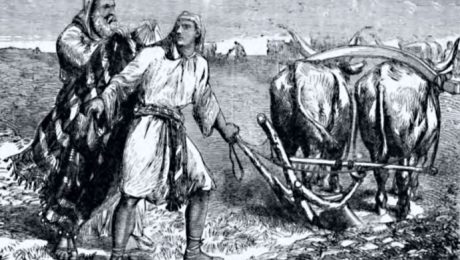 We begin this Sunday’s reflection with the account of the call of the prophet Elisha. It was just an ordinary day for Elisha. He was plowing his field, but God had directed Israel’s greatest prophet, Elijah, to anoint Elisha as his successor. When he found him, Elijah immediately placed his cloak over Elisha’s shoulders. God’s invitation came through that simple gesture. Elijah had passed on his prophetic mantle. It was a serious moment. Elisha’s response was immediate and radical. He asked permission to give a final kiss to his father and mother. He then slaughtered the oxen that had been pulling his plow and used the wood of the plow to offer them up as a holocaust to God. In that sacrifice he offered his entire past to God. Freed of any and all attachments, he left everything he knew and followed the prophet Elijah.

The theme of “the call” is taken up and developed in the Gospel. We begin with a scene of failure.

Jesus and the apostles were on their way to Jerusalem and were passing through Samaria. The apostles went ahead of him in an attempt to do some preliminary preaching but they were rejected by the people. They were filled with anger against the Samaritans. “Lord, do you want us to call down fire from heaven to consume them?” Their anger was met with a rebuke from Jesus. He redirected their vision and continued on the missionary journey.

As they traveled along, Jesus was inviting people to follow him. He met one rejection after another. They weren’t hostile rejections, however. There were half-hearted acceptances of his invitation. “First, let me go and bury my father.” “Let me say farewell to my family at home.”

Jesus clearly wanted more from them. “Let the dead bury their dead. But you, go and proclaim the Kingdom of God!” He wanted them to break from their past just as Elisha the prophet did. “No one who sets a hand to the plow and looks to what was left behind is fit for the Kingdom of God.” And to those who said to him, “I will follow you wherever you go,” he raised a serious caution. “Foxes have dens and birds of the sky have nests, but the Son of Man has nowhere to rest his head.”